The music video for the new Paul Lekakis song "Somebody (Is Out There)" is out now! The music video was filmed in Los Angeles, USA.
The song was written and produced by John von Ahlen of Parralox, who also contributed a few remixes to the release as well.
Paul Lekakis had a worldwide smash hit in the 80s with his track "Boom Boom - Let's Go Back To My Room" and has been releasing music since then. Digital Journal is a global digital media network with contributors from around the world. Reaching an audience of millions of monthly visitors, Digital Journal blends a new media approach with proprietary technology, data and social tool sets to deliver a unique and engaging experience. Digital Journal publishes to multiple platforms, from Web to Facebook, Twitter and more.

You can read the original article by clicking here >> http://www.digitaljournal.com/entertainment/music/review-parralox-infectious-on-electric-nights-single-and-music-video/article/510369

Special thanks to Markos Papadatos.

One of the planets leading synth blogs "The Electricity Club" have written an article about the music video for our new song "Electric Nights".

It's rather fabulous (the article!) and you can read it by clicking here >> http://www.electricity-club.co.uk/parralox-electric-nights/ The wait is over! The music video for Electric Nights has debuted on the industry renowned website EDM SAUCE.

Special thanks to Brad Taylor and Stefan Pellett.

Click here to read the article and watch the video! >> https://www.edmsauce.com/2017/12/15/premire-parralox-gets-glossy-glamorous-electric-nights-video/

Screenshot of the article >> Wildlife article on Being Blogged (Sweden) 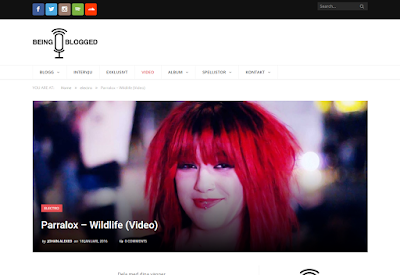